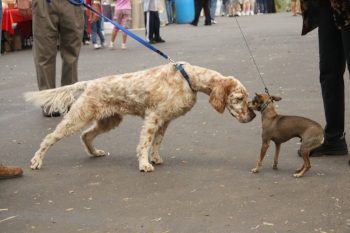 In case you haven’t been watching, Woofstock is on this weekend…and where am I? Comfortably seated at home, waiting to take Parker on a nice hike…maybe even a swim. I’m not in Toronto and I’m most certainly not on Front Street in the middle of the chaos. You might wonder why a Pet Professional isn’t participating in North America’s largest pet festival – I’ll let you in on the secrets in this post.

I went to Woofstock yesterday to support Big on Beagles – a wonderful Toronto-based assistance agency for Beagles experiencing troubled times. I spent about two hours before I felt like I was about to explode. My patience ran thin and Parker was sensing it too. I had an inkling this would happen and it even started to show during my first session of the day with my little Boston Terrier, Steve. His pup-parent turned to me and said, “We were going to go to Woofstock today – any words of advice?” I paused and tried to be positive. “Don’t go?” I replied. It was the best I could do.

The truth is, this festival has great intentions and the idea is wonderful. I’ll give it that…but that’s about all I can give it. Our city is crazy enough as it is with all the pedestrians, cyclists, motorists, etc…but now gather over 300,000 dogs and their humans (combined) together in the span of five city blocks, along with loud music, people yelling into microphones, food and drink everywhere, garbage strewn about and piles of ‘caca de chien’ that people have completely missed picking up, overflowing garbage bins covered in urine, and tell me that your dog is not going to become completely over-stimulated.

Yesterday, I ran into some very interesting people and wanted to give you a glimpse:

I walked into the Dean & Tyler booth to look at their custom harnesses that are really quite stunning. I was admiring the ones that allow you to add and remove patches that say things like “In Training”, “SECURITY”, “Search & Rescue” and “Service Dog”.

While looking around, Parker made friendly with a retriever mix whose human was paying for the vest he was wearing. It said “Service Dog”. She looked at me while her credit card was being processed and she beamed “You should get one too! Now I can take him everywhere!” I looked at her for a moment and didn’t say a word. “No one’s allowed to ask you for proof, so anyone can wear these now and get access to everywhere!” I let her dig her own hole. I took a deep breath and said “I won’t buy him one because I have integrity and I think it’s awful that you’re using the system for your own benefit when there are people who actually need their Service Dog to accompany them. That’s very dishonest.” And then I walked away. I’ll admit that there’s a part of me that wants to smack people like that right in the mouth.

As I walked over to the Big on Beagles booth to meet up with the lovely Marna, I passed by two Rottweiler puppies and their human. I’m a big Rotti fan, so I looked up at her to give her a smile and say “those are cute pups!” when I noticed two things: they were both wearing choke chains. My heart dropped a bit as I thought “poor, unsuspecting owner – she probably has no idea there are better tools out there.” But when I looked up at the owner, I noticed her t-shirt. She was wearing a company t-shirt with a logo for a dog training school, and on the back, it said “Trainer”. My heart dropped into my feet. Clearly, a “trainer” who has zero education in the field.

I couldn’t say anything – I’m not about to stick my nose where it doesn’t belong as I know I have a hard time holding my tongue in situations like this. I’ll leave it to her vet to explain tracheal, esophageal and cervical spinal damage caused by choke chains. They’ll certainly do that, won’t they? [insert head shaking here]

Ah, my favourite. The parent whose dogs are so tiny they are dressed up and carried in a purse instead of actually socializing on the ground with their own species. This one nearly gave me an aneurism yesterday. She finds out that I’m a trainer and she says to me “Oh, I love training. My dogs love learning. Watch this.” And she plops one pup on the ground, she stands tall, sticks out her chest, deepens her voice and stiffens every muscle in her body before bellowing “SIT. SIT. SIT.” and the poor dog sits with his ears pinned back, his eyes averted and his head as low as it can go as he cowers. She continues. “DOWN. LIE DOWN. DOWWWWWWN.” as she uses one hand for the hand signal that looks more like “I’m going to smack the daylights out of you”. The poor dog, still cowering and shaking, lays down and starts to quiver. She turns to face me proudly and says “I’m really good at training. We do this all the time.” I look at her and say “Yeah.” and I walk away. I can’t talk. Nothing I say to that woman is going to change anything and I have the feeling my tongue will split and curl as fire shoots out of my mouth. The best thing I can do is walk away without more than a word.

Parker and I stood by The Hydrant‘s booth, admiring the collars as a woman and her two Great Dane / Mastiff-type dogs strolled by, both on head halters. Parker leaned over to have a quick sniff and one of them turned and gave him a “hey – you’re too close” warning growl (something I find perfectly acceptable) and the woman yanked so hard on the leash that his head snapped right back into place.

Another woman, with her beautiful Doberman (on a prong collar, of course) was walking along, giving the poor dog constant corrections as she walked. The Doberman wasn’t even walking out of line – he was right beside her, but she was so used to “correcting” that she was doing it without even knowing it.

I can’t even count on two hands how many people were walking their puppies and yanking on their poor necks as they walked.

I wish hands-free leashes were mandatory in life. Woofstock breaks my heart. It’s hard enough walking around on a daily basis seeing prong collars, choke chains, people dragging puppies, fearful dogs and people who don’t even understand the basics of “doglish” but to see them gather in masses to celebrate this amazing species in this way, that’s too much for me.

The last straw was watching dogs strolling around with Kijiji bandanas around their necks. How is it that Woofstock allows a booth to be rented by the number one supporter of puppy mills? How is that acceptable? Where are the standards? I can get past the fact that we now have booths for places like Canadian Tire, Pledge, Rogers, Sony and Winners. These are clearly a money-making scheme that have very little to do with dogs (yes, I know that Canadian Tire and Winners sell a *few* dog-related products – they’re not exactly “pet stores” though). Why don’t we start having booths for anti-freeze and rat poison? As long as the money’s coming in, right?

One amazing quote of the day was “this is such a great socialization opportunity for our dogs!”

Yeah, if you want a dog that is completely overwhelmed, overstimulated, emotionally shutdown and perhaps even take on a behavioural issue like leash-based reactivity. It’s fantastic. Really.

I think I will stick with my own ideas of healthy socialization and look to Woofstock as simply a wonderful avenue for rescue agencies and other not-for-profits to get exposure. And if I do go next year, I’m going without my dogs and I’m going to try harder to wear rose-coloured glasses.