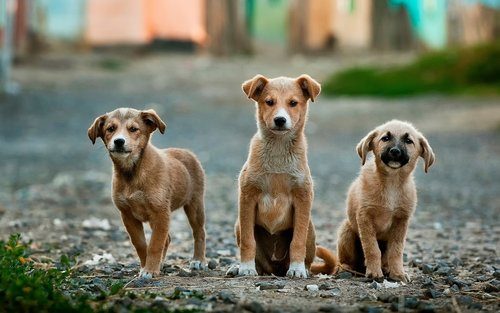 A few short months ago, I was helping a friend search for a dog to adopt for his family of five. He put himself on list after list with various local rescues. Of course, I was honoured to be a reference. At one point in the process, I spoke with a rescue coordinator on the phone, and after she asked me a few questions, I had a few for her.

I asked her where the dog in question is from and I was informed that the dog is a “Korean Meat Dog” and is being rescued and sent to Canada. I asked what the protocol is once the dog arrives in Canada and was informed that the new guardian would be expected to pick the dog up from the airport and let the dog have a few days to “decompress” at home. I asked her to clarify that the dog would not be going in to foster care, have an assessment, be seen by a local vet, etc. Correct. They are vetted before they are flown into Canada.

I sat with that for a moment. In silence.

“You are aware that they have three young children, correct?” I asked. She confirmed that she was aware of this fact and as a result, they had chosen a small dog for the family, thinking it would be the best fit.

I was stupefied. I felt as though she were dancing around, playing with a loaded gun. I was furious. Furious because my friend, had he not involved me in the process, might fall prey to the cute pictures and the sob-story that was sure to follow. He might be convinced that it’s “normal” to go pick up a rescue dog at the airport and bring it home, sight unseen, to his family who are eagerly awaiting their new dog.

A few days to decompress? Are you Sh*tting me? Pardon my French, but if you take an alien from Mars and place it on Earth, how long do you think it will take for it to decompress and act like a human? What does that even mean? These are not “normal” domesticated dogs. These are not dogs whose ancestors were social creatures, living in homes. These are not pet dogs. They are born and bred for the meat trade. Or they are from unknown histories. But it’ll take just a few DAYS to decompress?? If you picked me up and you moved me to a far away land where no one speaks my language, nothing is familiar, and it feels like Wacky Wednesday, how long do you think I need to decompress? Shall I do that near delicate newborns, perhaps? Just to be safe?

I think back to my friend and his family and I know that in their minds, they are picturing a happy life with their new dog and they want to do good by adopting. They picture a goofy dog who will run with them in the yard, take long walks, perhaps even go on road trips and vacations, visit family, go to dog parks, and curl up beside the couch during movie night or at sleepovers.

I had to say it to myself a dozen times before I could wrap my head around it.

We’re going to another country, plucking dogs from a dire and awful situation, flying them anywhere from 14 to 40 hours in cargo and switching planes, and sitting in holding, and then placing them in a home. WITH CHILDREN. Are these dogs vetted from a behavioural standpoint? Have they been assessed after a three-week decompression period in a stable home environment? Have they been assessed on-leash and off-leash with dogs and people, especially children? Are they accustomed to elevators, traffic, crowds, etc.?

I have asked too many questions. I have insulted them, perhaps. Or I have pulled the curtain back and now everyone is uncomfortable. We wish each other a nice day and we hang up.

Fast forward to today. My friend and his family have adopted a dog from a reputable rescue organisation that works with local First Nation communities and rural areas to help find permanent loving homes for unwanted strays. They adopted a puppy who needed a home, who was vetted and assessed, and placed in a VERY loving and wonderful foster home prior to adoption. The dog is a DOG. A domesticated dog. A dog who is safe around people and children. A dog who is physically sound and healthy.

The imported dogs that I was questioning - I couldn’t tell you if they are physically sound and healthy, behaviourally sound and healthy. Maybe they are. Maybe they’re absolutely fantastic and social and delightful. And maybe they’re not. I’m sure some are. It’s the luck of the draw and I know that many people will say “I got one and he’s perfect” and I salute you. I think it’s awesome and I’m super stoked for you!

Don’t get me wrong. I don’t want dogs to be used for meat. I don’t want them to be tortured or starved or beaten or neglected or anything else. But we have to ask ourselves if rescuing these dogs is what is going to change that.

Spoiler Alert: NO. IT IS NOT. Only education, awareness, and changes to the laws that protect animals will do that.

If we take all the money and effort that goes into bringing each Korean Meat Dog over to Canada and put it into an education and awareness program to stop the meat trade in Korea, we might actually get something done. And it might not involve putting our families, the public, and our hearts at risk.

I have worked with far too many cases involving imported dogs where they have been pulled from similar situations - meat trades, off the streets of far away lands, and they are plopped down into a downtown Toronto condo and expected to behave like a normal dog. Well, newsflash, they’re not. Many have not been rescued. Just because we feel sorry for a dog doesn’t mean it needs to be “rescued”. Many street dogs in other countries have an excellent quality of life and would be miserable in a condo for 20 hours out of each day, to be walked on a leash (what is that??) , forced to greet other dogs on leash, and fed dry, tasteless kibble, and to have these humans demand things that make no sense, and to be punished for being normal. 100% normal. Digging, barking, guarding, chasing, escaping, pulling on leash, etc.

I have worked with too many cases involving these dogs who have come to me after doing significant damage to a person or a dog and having to be euthanised because the world they now live in is far too scary for them and they cannot live safely in that world. These cases destroy me, fibre by fibre. To watch the face of the loving person who has tried so hard, crumble into tears. To hold their hand as we grieve together, the loss of what they thought would be their best friend. To sit with them to try to reconcile the loss of trust they are experiencing after an attack that resulted in stitches to themselves, a family member, a child, or another pet dog. It rips my heart out.

We have so many dogs in North America who truly need rescuing. We don’t need to go outside and bring dogs across the continents, bringing diseases we have never seen. We need education, awareness, law change, action. We are NOT helping.

Now, we find out that these dogs have brought with them something we have not had here before. Once again. I can only imagine the devastation of my friend and his family if they had taken the original route, adopting a Korean Meat Dog, only to find out it is carrying Brucellosis and has to be euthanised. The trauma would be overwhelming and there would be no word in existence for my fury at that “rescue”.

“The lax import regulations of rescue animals coming into the USA is on the verge of a serious problem. The USA has quarantine facilities at ports for cattle, horses and other livestock. It needs to be expanded to include dogs and likely other animals. Imported rescue dogs especially need to have their vaccinations for prevention of rabies, distemper, parvo virus and other diseases. While being held at a facility, they should be checked for other diseases such as canine influenza and zoonotic diseases such as brucellosis.

Rescue animals from other countries need to be quarantined, not put in foster homes where there could be exposure to other animals or immunosuppressed individuals until some of these vaccines and testing have been performed. These quarantine facilities should be inspected by knowledgeable individuals according to law.”

I’ll leave you with a link that you should bookmark now and keep informed via email updates. https://www.wormsandgermsblog.com/2019/03/articles/animals/dogs/canine-brucellosis-us/

I urge you to support LOCAL rescues who support positive reinforcement training, who disallow the use of shock collars and outdated training techniques, and who are absolutely vetting each and every dog in their care, and who truly care about you, your family, and the public.

I love my clients so dearly and I love dogs just as dearly. I have had more than six rescues in my own life and will continue to rescue dogs. Ethically. I want nothing more than to see all dogs happy and safe in their homes and for people to feel the same.

You might read this and disagree with me and that’s okay. Don’t spew hate if you do. Take this and go make a difference. Go and become an advocate for these dogs and find a way to make a change so that there is no longer a need to rescue Korean Meat Dogs. Put your money where your mouth is and make a difference in the long-run. I triple-dog dare you.